What is a Stroke?

What is a Stroke? 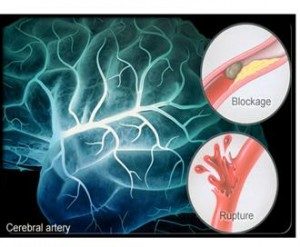 A stroke can occur in two main ways:

2. Haemorrhagic stroke (bleed in the brain)

When blood is stopped, the brain cannot get the oxygen it needs, brain cells in the area die and the brain can become permanently damaged. Brain cells usually die within an hour from the beginning of the stroke but can survive, at times, up to a few hours after the stroke starts. Areas of brain where the blood supply is reduced but not completely cut off are areas that can survive for some hours. These cells are in a state of shock and can either recover or die depending on what happens in the minutes and hours that follow. Without prompt medical treatment, this area of brain cells will also die

What is an infarct?

When a stroke occurs, it kills brain cells in the immediate area. Doctors call this area of dead cells an infarct. Brain cells in the infarct die because they are no longer receiving the oxygen and nutrients they need to function. These cells usually die within minutes to a few hours after the stroke starts.

The brain controls the way we move, think, speak, and eat. Everything we do is controlled by different parts of the brain. When a stroke happens, we lose the ability to do things that, that part of the brain controls. We may not be able to move one side of the body or have trouble thinking or speaking.

The way in which people are affected by stroke depends on where in the brain the stroke occurs, and on the size of the stroke. For example, someone who has a small stroke may experience only minor effects. On the other hand, someone who has a larger stroke may be left totally paralysed on one side, in a coma or may die due to the extent of the damage.
Stroke is always a medical emergency. It is important to recognise the early signs of a stroke or TIA.